The Geography of Greece
Geography Shapes Ancient Greek Life
ESSENTIAL QUESTION  What were the main features of the geography of Greece?
The mainland of Greece sticks out into the Mediterranean Sea. It is a peninsula , a body of land that has water on three sides. Greece also includes thousands of islands.
A gulf of water almost divides the Greek peninsula in two. The southern tip forms a second peninsula called the Peloponnesus (pehl•uh•puh•NEE•suhs). A narrow strip of land called an isthmus (IHS•muhs) links the Peloponnesus to the rest of Greece. 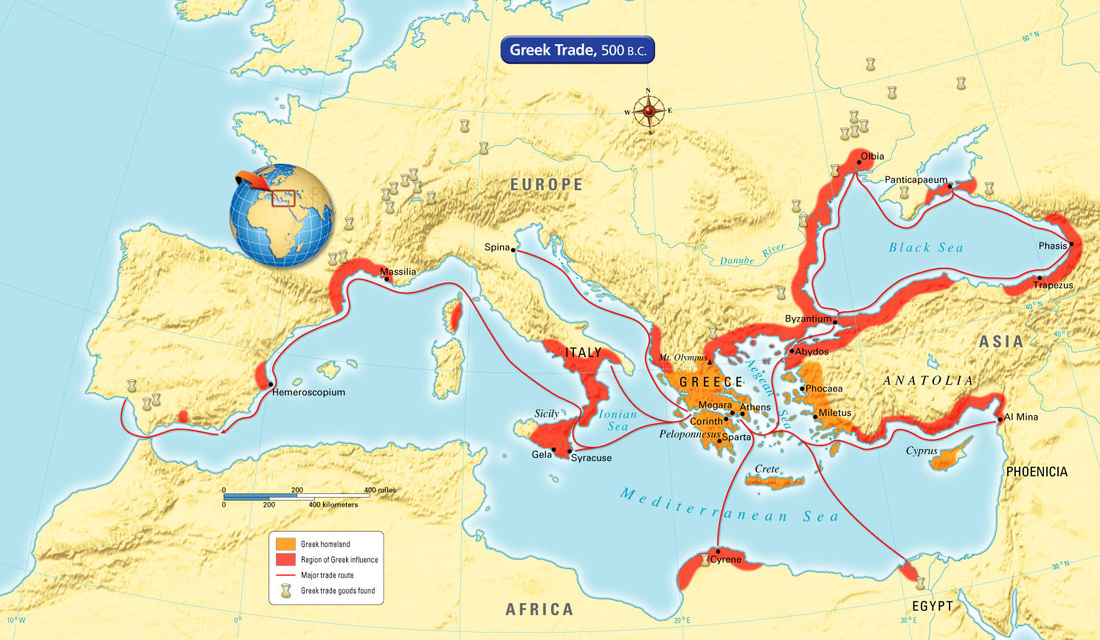 Landscape and Climate
Mountains cover 70 to 80 percent of Greece. The mountains divided it into many regions. The uneven landscape made transportation over land difficult. Greece had no large rivers on which people could travel. The rugged landscape made it hard to unite Greece under a single government.
Greece has mild, rainy winters and hot, dry summers. In much of Greece, temperatures range from about 50°F in winter to 80°F in summer. The warm climate encouraged outdoor life. For example, outdoor athletic competitions such as races were an important part of Greek culture. 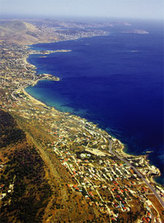 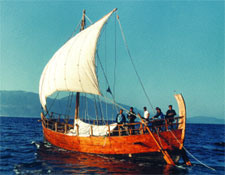 Greek Ship - In recent times, people built this ship to show how ancient Greek fishing ships looked.
Highways of Water   Several seas played a major role in the life of ancient Greece. The largest was the Mediterranean Sea to the south. The Ionian and Aegean seas were branches of the Mediterranean. The Ionian Sea is west of Greece. The Aegean Sea is east of Greece.
These "highways of water" linked most parts of Greece to each other. The Greeks used the seas as transportation routes.
A Seafaring People    The Greeks became skilled sailors and shipbuilders. They built rowing ships for fighting and sailing ships for trading. Some warships had two or three levels of oars on each side. Most sailing ships had a single mast and square sail.
The Ionian and Aegean seas are not very large. Small ships could sail around them by staying near the coast or by sailing from island to island. Once the Greeks learned these routes, they could sail to other regions.
The sea was a source of fish, an important part of the Greek diet. The Greeks traded fresh fish from the sea to local ports along the coast. The Greeks also dried some kinds of fish so that they could be transported over great distances.

The Greeks picked up the Phoenician alphabet between 900 and 800 B.C. They changed some letters to suit their language. The Greek alphabet later evolved into our own alphabet of 26 letters.
The Greeks also learned about coins from trading with other peoples. Coins were invented about 650 B.C. in Anatolia. Most parts of Greece were making their own coins by 500 B.C.
Eventually, the Greeks also developed new forms of literature and government. You will learn more about these developments in Lessons 2 and 3.
Lesson Summary
•  The mountainous geography of Greece limited agriculture and political unity.
•  The Greeks depended on the sea to connect with each other and with the wider world.
•  Trade brought an alphabet and coins to Greece.
Why It Matters Now . . .
The Greek alphabet influenced the development of all Western alphabets, including the English alphabet.
Beliefs and Customs