The aristocratic families did not own large estates for long. Each aristocrat divided his land among his sons. As a result, sons and grandsons owned much less property than their fathers and grandfathers had owned.

Aristocrats relied on farmers to grow the crops that made them rich. About nine out of ten Chinese were farmers. They lived in simple houses inside village walls. The aristocrats owned the fields outside the village walls. In these fields, farmers in northern China grew wheat and a grain called millet. In the south, where the climate was warmer and wetter, they were able to grow rice. To pay for the use of the land, the farmers gave part of their crop to the landowners. 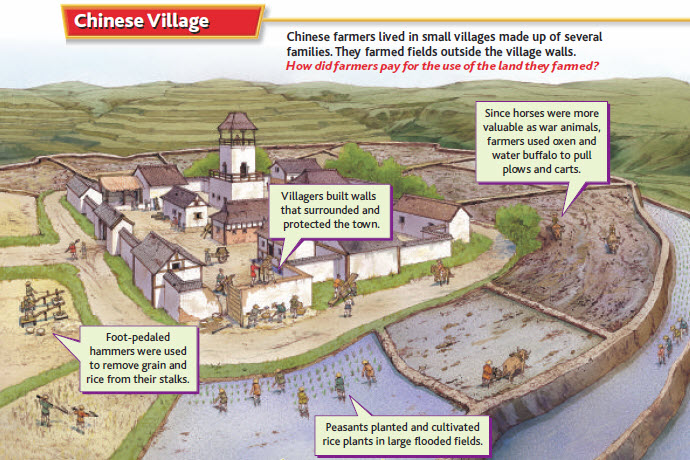 Most farmers also owned a small piece of land where they grew food for their family. A typical family ate fish, turnips, beans,
wheat or rice, and millet. The farmers had to pay taxes and work one month each year building roads and helping on other big government projects. In wartime, the farmers also served as soldiers.

In Chinese society, farmers ranked above merchants. The merchant social class included shopkeepers, traders, and bankers.
The merchants lived in towns and provided goods and services to the landowners.

Many merchants became quite rich, but landowners and farmers still looked down on them. Chinese leaders believed that government officials should not be concerned with money. As a result, merchants were not allowed to have government jobs.
What Was Life Like in a Chinese Family? The family was the basic building block of Chinese society. Because farming in ancient China required many workers, people had big families to help them produce more and become wealthier. Even the young children of a family worked in the fields. Older sons raised their own crops and provided food for their parents. Chinese families also took care of people in need—the aged, the young, and the sick.

Chinese families practiced filial piety (FIH • lee • uhl PY • uh • tee). This meant that children had to respect their parents and
older relatives. Family members placed the needs and desires of the head of the family before their own. The head of the family was the oldest male, usually the father. However, a son could take on this role, and then even his mother had to obey him.

Men and women had very different roles in early China. Men were respected because they grew the crops. They went to
school, ran the government, and fought wars. The Chinese considered these jobs more important than the work that
women did.

Chinese women could not hold government posts. However, women in the royal court could influence government decisions.
Wives of rulers or women in the royal family often convinced men in power to see things their way. Although their role was
limited, women also had an important influence in the home. Most women raised children and saw to their education. Many
women also managed the family finances.
Chinese Thinkers
Main Idea: Three Chinese philosophies—Confucianism, Daoism, and Legalism—grew out of a need for order.
As the Zhou kingdom weakened in the 500s B.C., violence became common. During the Period of the Warring States, rulers sent armies to destroy enemy states. Whole villages of men, women, and children were beheaded. Many Chinese began looking for ways to restore order to society.

Between 500 B.C. and 200 B.C., Chinese thinkers developed three major theories about how to create a peaceful society.
These theories are called Confucianism, Daoism, and Legalism.
Who Was Confucius? Confucius (kuhn • FYOO • shuhs) was ancient China’s first great thinker and teacher. He wanted to end the problems in China and bring peace to society.

Confucius believed that people needed to have a sense of duty. Duty meant that a person must put the needs of family and
community before his or her own needs. Each person owed a duty to another person. Parents owed their children love, and
children owed their parents honor. Husbands owed their wives support, and wives owed their husbands obedience. Above all, rulers had to set good examples. If a king ruled for the common good, his subjects would respect him and society would prosper.

Confucius believed that if each person did his or her duty, society as a whole would do well. He also urged people to be
good and to seek knowledge:  "There are those who act without knowing; I will have none of this. To hear a lot, choose the good, and follow it, to see a lot and learn to recognize it: this is next to knowledge." —Confucius, Analects

To Confucius, the best way to behave was similar to an idea known as the Golden Rule: “Do unto others as you would have
others do unto you.” Confucius urged people to “measure the feelings of others by one’s own,” for “within the four seas all
men are brothers.”

Confucius traveled through China trying to persuade government leaders to follow his ideas. Confucianism (kuhn• FYOO• shuh• NIH • zuhm) taught that all men with a talent for governing should take part in government. Of course, this idea was not popular with aristocrats, and few leaders listened.

Over time, Confucius won many followers who honored him as a great teacher. They wrote down his sayings and carried his message. After Confucius died in 479 B.C., his sayings spread throughout China. 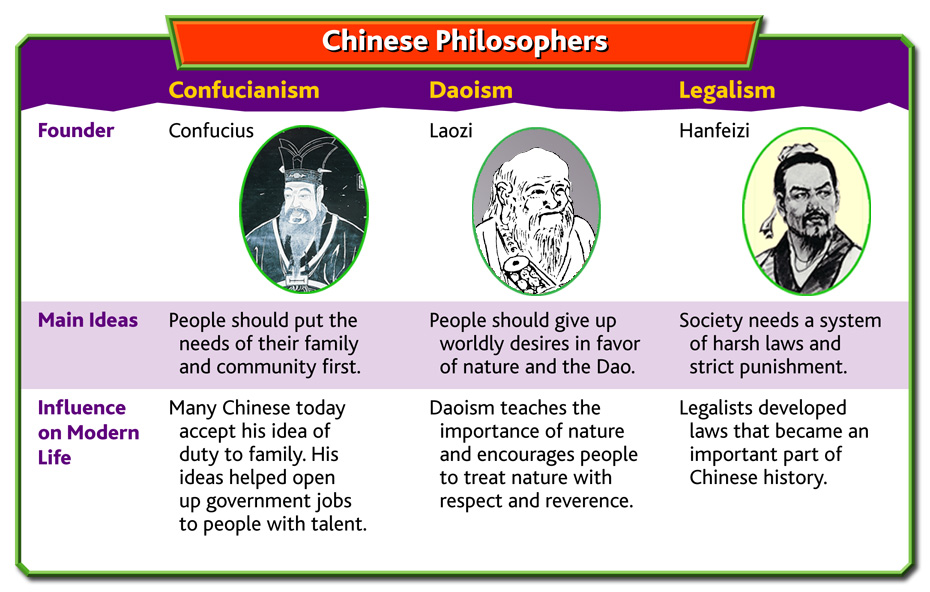 What Is Daoism? Daoism (DOW• IH • zuhm) is another Chinese philosophy that promotes a peaceful society. Daoism (also
called Taoism) is based on the teachings of Laozi (LOWD• ZOO). Laozi, or the Old Master, lived around the same time as
Confucius. Scholars do not know if Laozi was a real person. However, the ideas credited to him became popular between
500 B.C. and 300 B.C.

The ideas of Daoism are written in Dao De Jing (The Way of the Dao). Like Confucianism, Daoism tells people how to
behave. Daoists believed that people should give up worldly desires. They should turn to nature and the Dao—the force that guides all things. To show how to follow the Dao, Daoists used examples from nature: "Higher good is like water: the good in water benefits all, and does so without contention. It rests where people dislike to be, so it is close to the Way. Where it dwells becomes good ground; profound is the good in its heart, Benevolent the good it bestows."—Laozi, Tao Te Ching

In some ways, Daoism is the opposite of Confucianism. Confucius taught that people should work hard to improve the world.
Daoism told people to give up their concerns about the world. It said they should seek inner peace and live in harmony with
nature. Many Chinese followed both Confucianism and Daoism.
What Is Legalism? A third group of thinkers disagreed with the idea that honorable men in government could bring peace to society. Instead, they argued for a system of laws. People called their thinking Legalism (LEE • guh• LIH • zuhm), or the “School of Law.”

A scholar named Hanfeizi (HAN • fay • DZOO) developed the teachings of Legalism during the 200s B.C. Unlike Confucius or
Laozi, Hanfeizi taught that humans were naturally evil. He believed that the government needed to issue harsh laws and stiff
punishments to force them to do their duty. His followers believed that a strong ruler was needed to maintain order in society. Many aristocrats liked Legalism because it favored force and power, and did not require rulers to show kindness or understanding. Its ideas led to cruel laws and punishments for Chinese farmers.

The Qin and Han Dynasties