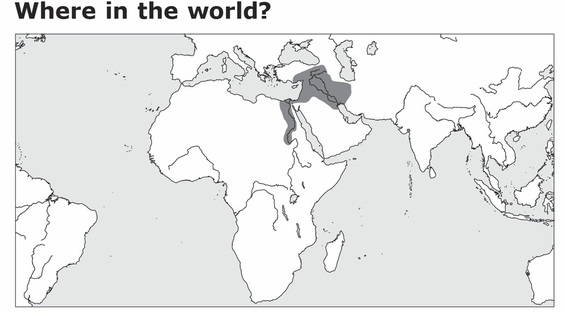 Beginnings
Around 1800 B.C., a group called the Israelites appeared in southwest Asia. The Israelites were different from many
other groups at the time. They practiced monotheism. This means they believed in one God. Other groups practiced polytheism, the worship of more than one god.

The Israelites also believed that God sent prophets. These prophets were messengers who shared God’s words. The Israelites wrote about their religious beliefs and history. Some of these writings became the Hebrew Bible. These beliefs eventually became a religion called Judaism. Today, the followers of this religion are called Jews. 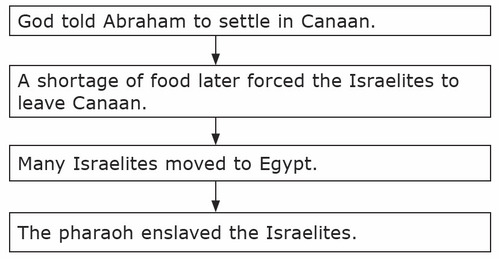 Jewish belief states that the Israelites descended from a man named Abraham. The Hebrew Bible says that God told Abraham to settle in Canaan. God promised that Abraham and his descendants would always control Canaan.

A shortage of food later forced the Israelites to leave Canaan. Many of them moved to Egypt. Eventually, Egypt’s leader, the pharaoh, enslaved them. The Israelites had to work at hard labor. They prayed to God for freedom.

The pharaoh then changed his mind. He sent his army to catch the Israelites. The Hebrew Bible states that God parted the Red Sea so that the Israelites could cross.

When the Egyptians followed, they drowned. The journey of the Israelites out of Egypt is called the Exodus. The Jewish holy festival of Passover celebrates their freedom from slavery.

The Land of Canaan
The Hebrew Bible says that Moses died before reaching Canaan. A new leader named Joshua led the Israelites to Canaan. They found other groups already living there. Two of these groups were the Phoenicians and the Philistines. These groups had different beliefs and ways of life than the Israelites.

The other group was the Philistines. They came from near present-day Greece. The Philistines made iron tools and weapons. They built walled towns and a put together a strong army.

The Israelites believed that God wanted them to claim Canaan as their homeland. According to the Hebrew Bible, Joshua led them into battle to achieve this goal. At the city of Jericho, the Israelites marched around the city walls for six days. On the seventh day, the walls fell. The Israelites took control of Jericho.

Joshua led the Israelites into other battles. They divided the lands they captured between the 12 tribes. When Joshua died, leaders called judges ruled the tribes. The judges settled disputes and led troops into battle. A woman judge named Deborah became known for her bravery. She helped advise troops in battle.

After many battles, the Israelites won control of central Canaan. The Hebrew Bible states that they worshiped God in a tabernacle. This is a large tent-like building that could be taken along as they moved from place to place. The tabernacle housed the Ark of the Covenant, a wooden chest. The Israelites believed the Ten Commandments were written on tablets kept in the Ark. They carried the Ark into battle with them. The believed it would ensure a victory, or make certain they won.