Historians call the early period of human history the Stone Age. They do this because it was the time when people used stone to make tools and weapons. The earliest part of this period was the Paleolithic (pay • lee • uh • LIH • thick) Age. In Greek, paleolithic means "old stone." Therefore, the Paleolithic Age is also called the Old Stone Age. The Paleolithic Age began about 2.5 million years ago and lasted until around 8000 b.c. Remember, that is about 4,500 years earlier than recorded time, which starts about 5,500 years ago.

Surviving in the Paleolithic Age

Try to imagine what life was like during the Paleolithic Age. Think about living in a time long before any roads, farms, or villages existed. Paleolithic people often moved around in search of food. They were nomads (NOH • mads), or people who regularly move from place to place to survive. They traveled in groups, or bands, of about 20 or 30 members.

Paleolithic people survived by hunting and gathering. The search for food was their main activity, and it was often difficult. They had to learn which animals to hunt and which plants to eat. Paleolithic people hunted buffalo, bison, wild goats, reindeer, and other animals, depending on where they lived. Along coastal areas, they fished. These early people also gathered wild nuts, berries, fruits, wild grains, and green plants. 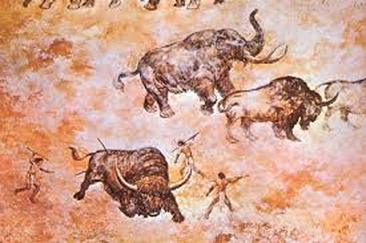 Paleolithic men and women performed different tasks within the group. Men—not women—hunted large animals. They often had to search far from their camp. Men had to learn how animals behaved and how to hunt them. They had to develop tracking methods. At first, men used clubs or drove the animals off cliffs to kill them. Over time, however, Paleolithic people developed tools and weapons to help them hunt. The traps and spears they made increased their chances of killing their prey.

Women stayed close to the camp, which was often located near a stream or other body of water. They looked after the children and searched nearby woods and meadows for berries, nuts, and grains. Everyone worked to find food, because it was the key to the group's survival.

Some scientists believe that an equal relationship existed between Paleolithic men and women. It is likely that both made decisions that affected the band or group. Some evidence suggests that some men and women may have hunted in monogamous pairs. This means that a man and a woman worked together to find food for themselves and their children. Such groupings became the first families.

The Invention of Tools

Culture is the way of life for a group of people who share similar beliefs and customs. The methods Paleolithic people used to hunt and gather their food were part of their culture, as were the tools they used.

Technology (tehk • NAHL • uh • jee)-tools and methods to perform tasks-was first used by Paleolithic people. Before this time, sticks, stones, and tree branches served as tools. Later, people made devices from a hard stone called flint. Have you ever imagined how difficult it would be to prepare or eat food without a cutting tool? Paleolithic people learned that by hitting flint with another hard stone, the flint would flake into pieces. These pieces had very sharp edges that could be used for cutting. Hand axes, for example, were large pieces of flint tied to wooden poles. Flint technology was a major breakthrough for early peoples.

Over time, early people made better, more complex tools. Spears and bows and arrows made killing large animals easier. Harpoons, or spears with sharp points, and fishhooks increased the number of fish caught. Early humans used sharp-edged tools to cut up plants and dig roots. They used scraping tools to clean animal hides, which they used for clothing and shelter.

By the end of the Paleolithic Age, people were making smaller and sharper tools. They crafted needles from animal bones to make nets and baskets and to sew hides together for clothing. This technology had a far-reaching effect. It drove the development of more advanced farming tools and influenced where people settled.

Climate affected how Paleolithic people lived. Some early people lived in cold climates and made clothing from animal skins to stay warm. They sought protection in available natural shelters, such as caves and rock overhangs. Remember, there were no houses or apartment buildings as we know them in the Paleolithic Age. Gradually, humans learned to make their own shelters. People constructed tents and huts of animal skins, brush, and wood. In very cold climates, some people made shelters from ice and snow. In regions where wood was scarce, Paleolithic people used the large bones from dead woolly mammoths, or hairy elephant-like animals, to build frames for shelters. They then covered the bones with animal hides.

People living in warmer climates, on the other hand, needed little clothing or shelter. For the purposes of safety and comfort, however, many lived in caves and huts. These shelters provided protection against attacks by large animals.

Life became less difficult for Paleolithic people once they discovered how to make fire. People learned that fire provided warmth in cold caves. It provided light when it was dark and could be used to scare away wild animals. Armed with spears, hunters could also use fire to chase animals from bushes to be killed. Eventually, people gathered around fires to share stories and to cook. Cooked food, they discovered, tasted better and was easier to chew and digest. In addition, meat that was smoked by fire did not have to be eaten right away and could be stored.

How did people learn to use fire? Archaeologists believe early humans produced fire by friction. They learned that by rubbing two pieces of wood together, the wood became heated and charred. When the wood became hot enough, it caught fire. Paleolithic people continued rubbing wood together, eventually developing drill-like wooden tools to start fires. They also discovered that a certain stone, iron pyrite, gave off sparks when struck against another rock. The sparks could then ignite dry grass or leaves-another way to start a fire.

Other advancements took place during the Paleolithic Age. One important advancement was the development of spoken language. Up until this time, early people communicated through sounds and physical gestures. Then they began to develop language.

Ancient peoples started to express themselves in words for the same reasons we do. We use language to communicate information and emotions. Language makes it easier for us to work together and to pass on knowledge. We also use words to express our thoughts and feelings. The spoken language of early people was constantly growing and changing. New technology and more complicated experiences, for example, required new words.

Early people also expressed themselves through art. Some of this art can still be seen today, even though it is thousands of years old. For example, in 1879 a young girl named Maria de Sautuola wandered into a cave on her grandfather's farm near Altamira, Spain. She was startled by what she discovered on the walls of that cave:

"Maria entered the cave . . . and suddenly reappeared all excited, shouting 'Papa, mira, toros pintados! [Papa, look, painted bulls!]' Maria had discovered one of the most famous animal-art galleries in the world."
—from Hands: Prehistoric Visiting Cards? by August Gansser

About ten thousand years before Maria's visit, Paleolithic artists had painted mysterious signs, including what looked like a herd of animals-horses, boars, bison, and deer-on the cave's ceiling. In 1940, a cave with similar paintings to those in Spain was discovered near Lascaux (lah • SKOH) in southern France.

Paleolithic cave paintings have been found all around the world. Early artists crushed yellow, black, and red rocks and combined them with animal fat to make their paints. They used twigs and their fingertips to apply these paints to the rock walls. They later used brushes made from animal hair. Early people created scenes of lions, oxen, panthers, and other animals. Few humans, however, appear in these paintings.

Tools and fire were two important technological developments of Paleolithic people. Throughout history, people have used new technology to help them survive when the environment changes. The ice ages were major environmental disturbances. The changes they brought about threatened the very survival of humans.

What Changes Came With the Ice Ages?

The ice ages were long periods of extreme cold that affected all of Earth. The most recent Ice Age began about 100,000 years ago. Thick sheets of ice moved across large parts of Europe, Asia, and North America. As the ice sheets, or glaciers, grew larger, the water level of the oceans was lowered. The low sea levels exposed a strip of dry land connecting the continents of Asia and North America. This strip of land was known as a land bridge. The land bridge acted as a natural highway that allowed people to travel from Asia into North America. From there, Paleolithic peoples moved southward to settle in different regions. 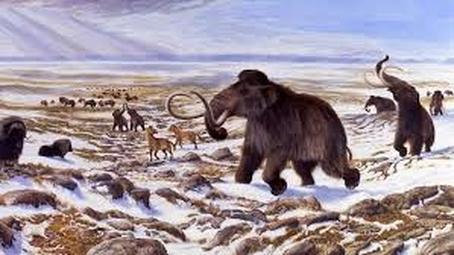 How Did the Ice Ages Affect Humans?

Ice age conditions posed a grave threat to human life. To survive in the cold temperatures, humans had to adapt, or change, many areas of their lives. One way they adapted their diets was by enriching meals with fat. To protect themselves from the harsh environment, they learned to build sturdier shelters. They also learned to make warm clothing using animal furs. Paleolithic people used fire to help them stay warm in this icy environment. The last Ice Age lasted about 90,000 years, ending between about 9000 and 8000 b.c.
Agricultural Revolution