The Origins of Hinduism 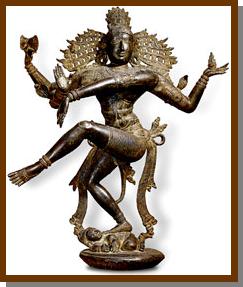 Aryans Move Into India
ESSENTIAL QUESTION   Who were the Aryans?
Most Indo-Europeans were nomads. They lived in family groups or clans and herded cattle, sheep, and goats. They also were warriors who rode horse-driven chariots. They fought with long bows and arrows and with bronze axes.
The Indo-European Migrations
Around 2000 B.C., something drove the Indo-Europeans from their homeland. Historians do not know if a drought, a plague, or an invasion made them leave. Different groups moved to different regions. The Hittites went to Southwest Asia. Many other Indo-Europeans settled in parts of Europe.

Hindu Kush - This mountain range runs along the northwest border of the Indian subcontinent. The Aryan people crossed these mountains to enter India.
The Aryan Migrations
In about 1500 B.C., the Aryans (AIR•ee•uhnz) traveled east into India. According to some historians, the Aryans belonged to the larger Indo-European group. In contrast to the city-dwelling Harappans, the Aryans were herders. They lived in simple houses. They spoke an Indo-European language called Sanskrit.

Did Aryan warriors in chariots conquer the walled cities and force the Harappans to flee south? For years, history books told that story. But new research suggests a different tale. Two hundred years before the Aryans arrived, the largest Harappan cities lay in ruins. As Lesson 1 explained, this destruction may have been the result of earthquakes and floods. 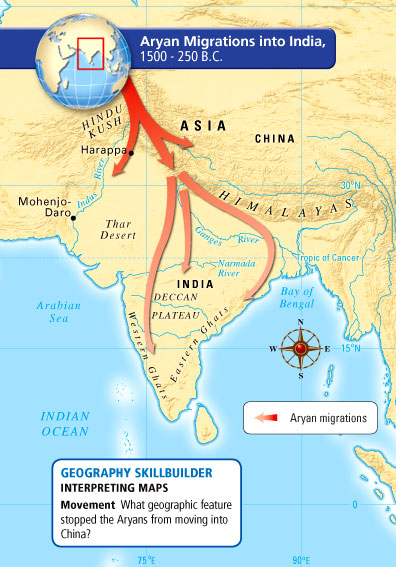 Changes to Indian Life
ESSENTIAL QUESTION   How was Aryan society organized?
The Aryans entered India gradually. They practiced a mysterious religion that appealed to many Dravidians–the people living in India when they arrived. As a result, Aryan religion and language spread. In turn, the Dravidians taught the Aryans about city life. Because of these interactions, India developed a complex, blended culture.
The Caste System
Aryan society was organized into classes: warriors, priests, and commoners. As Indian society grew more complex, these classes developed into what was later called the caste system. A caste is a social class whose members are identified by their job. Because there are thousands of different jobs, thousands of groups exist. Broadly, those groups are organized into four categories. (See the chart on the next page.)
After many centuries, another group came into being thatwas considered below all other groups. This group was called the untouchables. They had to do the jobs no one else wanted.

Aryan Beliefs and Brahmanism
The early religion of the Aryans is now called Brahmanism, after the name of the Aryan priests, or Brahmins. The Aryans worshiped many nature deities. The Brahmins made sacrifices to those deities by offering animals to a sacred fire. Over time, the ceremonies became more and more complex. Some lasted for days–or even months. The rituals of the Aryan religion and many hymns to their deities are found in ancient Sanskrit sacred texts called the Vedas.

As time passed, Indians began to question how the world came into being. These questions led to changes in contemporary religious ideas. One change was a belief that one spirit governed the universe.

Later, Indians wrote about their ancient history in such works as the Mahabharata (MAH•huh•BAH•ruh•tuh)–an epic poem that retells many legends. The Bhagavad Gita (BAH•guh•vahd GEE•tuh) is part of the Mahabharata.
Hinduism: The Religion of India
ESSENTIAL QUESTION   How did the religion of Hinduism develop?
The Bhagavad Gita is an important sacred text of Hinduism. Hinduism is the modern name for the major religion of India, which grew out of early Brahmanism.

Many Deities
Hindus worship many deities. Although they believe in many deities, Hindus also recognize one supreme God or life force. Hindus consider the other deities to be parts of the one universal God. The three most important of the other deities are Brahma, the creator; Vishnu, the protector; and Shiva, the destroyer. (Shiva destroys the world so that it can be created anew.) Shiva's wife, Kali, also has many worshipers.

Many Lives
Hindus believe in reincarnation, which means that each person has many lives. What a person does in each life determines what he or she will be in the next life, according to a doctrine called karma. Deeds (good or evil) cause a person to be reborn in a higher or lower life form. (Hindus believe that animals, like humans, have the supreme life force in them. For that reason, many Hindus are vegetarians. They will not eat animals.)

Reincarnation creates a repeating cycle of birth, life, death, and rebirth. The cycle ends only when a person achieves a mystical union with God. To achieve that, a person must come to realize that his or her soul and God's soul are one.
Many Paths to God
Hindus believe they connect with God by following their own individual path. Part of that path concerns one's job, which is linked to the caste system. Devout Hindus must faithfully carry out their assigned duties in life.

Hindus have a choice of spiritual practices to grow closer to God.Two of these are also popular in Western countries. Meditation is the practice of making the mind calm. Yoga is a complex practice that includes exercise, breathing techniques, and diet.
Lesson Summary
• After Harappan civilization declined, Aryan people brought their culture to India.
• Aryan society developed a class structure that was based on jobs and is called the caste system.
• Hindus worship many deities. They believe in reincarnation and karma.

Why It Matters Now . . .
Hinduism ranks third among world religions in the number of followers (after Christianity and Islam).
Buddhism and India's Golden Age