Some aspects of the modern Olympics come from the ancient Greek Olympics, but there are also a lot of differences between the ancient and modern Games. The ancient Olympics always took place at Olympia, in the south of Greece, every four years in August or September. According to tradition they were started in 776 B.C. and they continued until A.D. 393. They were held to honor the god Zeus, who had a large sanctuary next to the stadium where the competitions were held.

The Olympics were very popular and important events. The Greeks even measured their years by reference to the Olympics! Thousands of people came from all over Greece to compete or watch. If there was a war, there was a truce around the time of the Olympics to allow all competitors to go. Most spectators slept in the open or in tents. There was no city at ancient Olympia, just the sanctuary, and sporting venues.

The Ancient Olympics: Spectators and Events

The games lasted for five days. In addition to athletic events, there were also religious ceremonies and banquets. Only male citizens were allowed to compete. All slaves, all women and men who had committed certain crimes were excluded. Women weren't even allowed to watch, apart from a priestess of Demeter and possibly also girls. For some of the events, there were also competitions for boys. There were far fewer sports than in the modern Olympics – the ancient Olympics only consisted of the following:
All of the events except for the race wearing armour and chariot races took place in the nude. The fighting events could be quite violent, and people sometimes died.
The Ancient Olympics: Prizes
The prizes for winning competitions at the Olympics were very simple – all a winner got was a crown of wild olive leaves. However, each polis was eager to have one of its citizens win and so would offer all kinds of additional prizes to any of its citizens who won. These might include front row seats at festivals or even free meals for life. A winner also had the right to erect a statue of himself at Olympia. Poets might also be commissioned to write a poem about the winner. There were no second or third prizes.
Other Competitions
A separate competition, called the Heraia, was held at Olympia in which young women competed. There were different age divisions, though the only event was foot-racing. It was held every four years, but in different years to the Olympics. It was held to honor Hera, Zeus' wife. Women did not compete naked, but wore tunics coming down to a little above the knee.

The Olympics was not the only big athletics festival in Ancient Greece. Similar games were also held at Delphi in honor of Apollo, at Nemea in honor of Zeus, and at Isthmia in honor of Poseidon. They were timed so that every year there was at least one competition on.
The Modern Olympic Games
The Olympics were started again in 1896 by a French man named Pierre de Coubertin. Although they continue some of the ancient traditions, some things in the modern Olympics have changed. Today they are a truly international event and both men and women can compete. Just like the ancient Olympics, the modern Olympics are very popular, and people come from far away to see them. 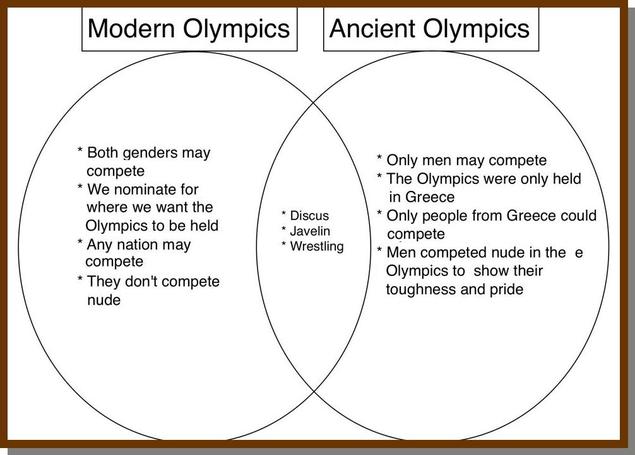