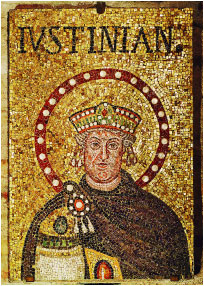 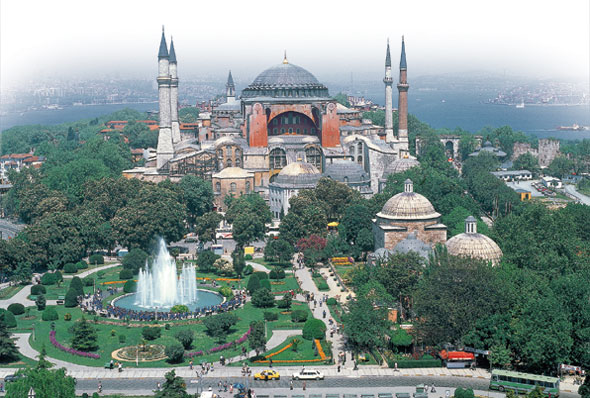 Hagia Sophia - Built by Justinian, Hagia Sophia was the greatest of all churches in Constantinople. Today it is a museum.
Rebuilding Constantinople
Justinian also began to rebuild Constantinople, which had suffered much damage from a revolt. He rebuilt the city walls. He also built schools, hospitals, law courts, and churches. The most famous church was Hagia Sophia (HAY•ee•uh soh•FEE•uh). Constantinople was again a glorious city.
Preserving Roman Culture
Justinian appointed a committee to create a uniform code of law based on Roman law. These experts dropped outdated laws and rewrote others to make them clearer. The new code was called the Justinian Code. The code included laws on marriage, slavery, property ownership, women's rights, and criminal justice.

Although they spoke Greek, Byzantines thought of themselves as part of the Roman cultural tradition. Byzantine students studied Latin and Greek, and Roman literature and history. In this way, the east preserved Greek and Roman culture. In the former Western Empire, the Germanic peoples blended Roman culture with their own. However, they lost much of the scientific and philosophical knowledge of the Greeks and Romans.

The Church Divides
ESSENTIAL QUESTION   Why did the Christian church divide?
The division of the empire also affected the Christian church. Religious practices developed differently in the Christian churches of the east and of the west. Cultural practices and limited contact between the two areas caused these differences.
The Church Divides
Another difference had to do with the authority of the emperor over church matters. In the east, the emperor had authority over the head of the church. In the west, there was no emperor and the pope began assuming more responsibilities in governing the former Western Empire.

Problems between the two churches began to grow. The pope claimed authority over the churches in both eastern and western empires. In A.D. 1054, delegates of the pope attempted to remove the eastern head of the church. The eastern church responded by refusing to recognize the authority of the pope.

Finally, the Christian church split in two. The church in the west became known as the Roman Catholic Church. Catholic means "universal." The church in the east became the Eastern Orthodox Church. Orthodox means "holding established beliefs." Over time, the split led to the development of two separate European civilizations. Each had its own view on the relationship between church and state.

Religion and Government
The pope claimed authority over Christian emperors and kings. This authority allowed the Roman Catholic Church to influence government in the lands that were once a part of the Western Roman Empire. Disagreements between the church and some kings and emperors of Western Europe would later cause major conflicts in European history.

Finally in 1453, an army of Ottoman Turks captured Constantinople. The city's conquest marked the end of the Byzantine Empire—a thousand years after the fall of the Western Roman Empire. 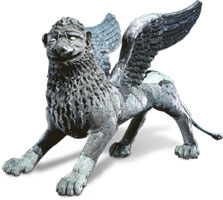 Lion of St. Mark - The winged lion stands guard near the Byzantine-style Cathedral of St. Mark located in Venice, Italy.
Lesson Summary
Why It Matters Now . . .
Today millions of people practice their faith as members of the Roman Catholic Church or the Eastern Orthodox Church.
The Legacy of Rome