The Legacy of Greece

Build on What You Know   You have learned about the great art, literature, and thought of Chinese and Indian civilizations. Greek civilization spread through the actions of Alexander the Great. Later, the Hellenistic culture spread to Mediterranean countries and into Asia. 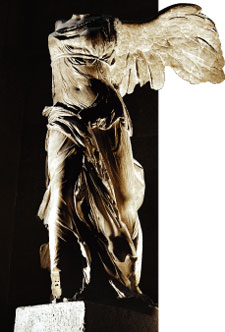 Hellenistic Sculpture - This sculpture is titled Winged Victory of Samothrace. The sculpture features Nike, the goddess of victory.
The Arts and Architecture
ESSENTIAL QUESTION   What new elements did Greek art and architecture introduce?
The Greeks invented drama as an art form. Drama was a written work designed for actors to perform. The Greeks built the first theaters in the western world.
Drama   Greek drama was a part of every city's religious festival. Wealthy citizens spent money to sponsor the production of the dramas. Writers submitted plays to the city leader, who chose the ones he thought were the best. Then a play was assigned to a troupe of actors for production. When the plays were performed, contests were held to award prizes to the best writers.

Ancient Theater - The theater at Epidaurus is built into a hillside.
Actors   The actors in plays were men, who also played the parts of women. The actors wore colorful costumes and masks to portray their characters. The stage sets were colorful as well. Dancing was important in Greek festivals and plays. Often the plays included a large chorus that danced, sang, and recited poetry. Drama had two forms: tragedy and comedy.
Tragedy and Comedy   The first form, tragedy, was a serious drama that presented the downfall of an important character, such as a king. Common themes for tragedy included love, war, and hate. One example is the hero in the play Oedipus Rex (EHD•uh•puhs rehks) by Sophocles (SAHF•uh•KLEEZ). In the play, a good, intelligent ruler named Oedipus kills a man. Later, Oedipus finds out that the man he killed was really his own father.
The second form of drama, called comedy, was a less serious dramatic work. Comedies often made fun of politics, important people, and ideas of the time. Comedies usually ended happily. Aristophanes (AR•ih•STAHF•uh•neez), who was born in the time of Pericles, was a great writer of comedy. One of his plays, The Birds, makes fun of those who would gain power. In the play, a king becomes a bird and founds a city in the sky. The city is called Cloudcuckooland. The hero blocks the gods from interfering with his rule and declares himself the king of the universe.

Dramatic Masks - The mask at the top represented comedy. The lower mask was used in tragedy.
Sculpture   Greek artists aimed to capture the ideal in their work. In other words, they tried to portray objects, including humans, in as perfect a form as possible. The artists tried to create a sense of order, beauty, and harmony in every work. Since the Greeks spent much of their time out-of-doors, works of art were located outside and were of a large scale. Many Greek sculptures portrayed the gods. The sculptures were placed in temples. These temples were built to honor the gods.
One of the most famous statues was created to honor the goddess Athena. In 447 B.C., Pericles appointed the sculptor Phidias (FIHD•ee•uhs) to direct the building of the Parthenon as a house for Athena. Phidias created a statue of Athena that was placed inside. He used gold and ivory to make the statue. It stood more than 30 feet tall when it was finished.
Architecture   Greek architects designed temples, theaters, meeting places, and wealthy citizens' homes. Like the sculptors, the architects worked to create beautiful buildings with graceful proportions. Several distinct elements appeared in architectural works. One element was a column.
Often a series of columns, called a colonnade, was placed around the outside of a building. The space between the top of a column and the roof is called a pediment. Sculptures or paintings usually were placed in the pediments. The Parthenon displayed the temple form that was most often used. It had a four-sided colonnade around a room built to house the statue of the goddess Athena. Sculptured designs that portrayed scenes in Athena's life were put in the pediments of the Parthenon. 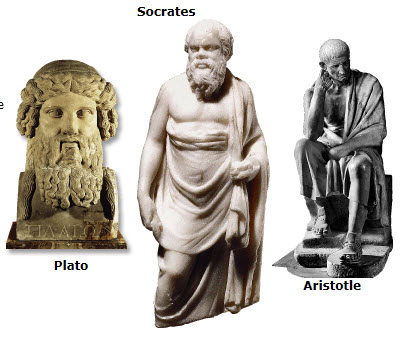 Greek Philosophers - The three most famous Greek philosophers are Plato, Socrates, and Aristotle.
Greek philosophers had two basic ideas about the universe. First, they assumed that the universe is put together in an orderly way. They believed that laws of nature control the universe. Second, the philosophers assumed that people could understand these laws. The philosophers used these two ideas when they sought the truth.
Socrates   Over a period of time, Greece had many famous philosophers. One of them was Socrates (SAHK•ruh•TEEZ), who lived from 470 to 399 B.C. He encouraged his young students to examine their beliefs by asking them a series of questions. This question-and-answer style of teaching is called the Socratic method.
Young people liked the teaching of Socrates. But his enemies accused him of causing young people to rebel. They brought him to trial. Socrates told the court that he was teaching young people to think about their values and actions. The jury did not agree with his actions and sentenced him to death. Socrates died by drinking a poison called hemlock. 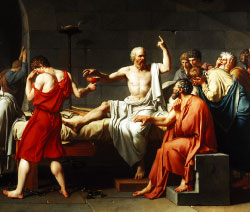 Mathematics and Physics   Knowledge of very complicated mathematics is needed to do work in astronomy. Hellenistic mathematicians developed several kinds of math. The mathematician Euclid (YOO•klihd) created a geometry text complete with proofs for his work. The work of Euclid is still the basis for geometry.
Archimedes (AHR•kuh•MEE•deez) explained the law of the lever. As an inventor, he developed the compound pulley. He is also believed to have created a device to lift water. He intended his water-lifting device to be used for the irrigation of fields.
The ideas of Archimedes were used to build pumps and eventually to create a steam engine.
The first noted female mathematician, Hypatia (hy•PAY•shuh), taught at Alexandria. Hypatia was also an astronomer. She wrote about the works of Ptolemy and about Euclid and geometry as well. She was also the leader of a philosophical movement based on the works of Plato.

Archimedes' Water-Lifting Device - The device is a large coil open at both ends. It is placed inside a water tight tube. As the coil turns it brings up water from a lower level.
Summary
• Greek and Hellenistic writers, artists, and architects invented new and beautiful styles.
• Greek philosophy and history set standards of logic, reason, and record keeping.
• Hellenistic scientists made important discoveries about the world.
Why It Matters Now . . .
The Greek and Hellenistic cultures set enduring standardsin art, philosophy, and science. 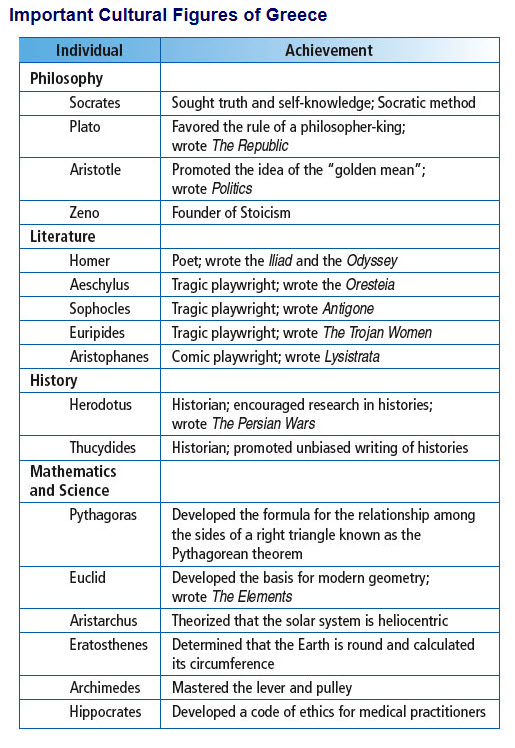