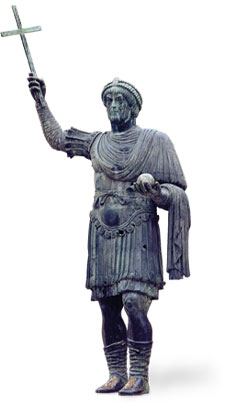 Bronze Statue - The Roman emperor Valentinian holds aloft a Christian cross, showing the conversion of the Roman Empire to Christianity.
Build on What You Know   The Roman religion included elements drawn from the religions of other peoples. An important issue facing the ancient world was how Rome would react to the new religion of Christianity.
Rome's Policy Toward Other Religions
ESSENTIAL QUESTION   Why was Rome hostile to Christians and Jews?
Rome tolerated the alien religious practices of the people it conquered. It exempted Jews from the requirement to worship Roman gods, including the emperor. However, Rome would not let the religions of subject peoples inspire rebellion. When a Jewish revolt began in Jerusalem, the Romans destroyed the Temple.
A Christian Threat
As more Gentiles joined the Christian movement, the Romans became alarmed. Some Gentiles claimed that they should not have to worship the emperor. The appeal of Christianity to slaves and women also caused alarm. Finally, Christian talk about a Lord who would establish a kingdom seemed to imply an end to the Roman Empire.

Rome - This view shows the Sant'Angelo Bridge over the Tiber River at dusk, with St. Peter's Basilica in the background.
The Roman Persecutions
Roman doubts about Christianity soon led to active hostility. Nero blamed the Christians for a fire that leveled much of Rome in A.D. 64. Many Christians were tortured and killed because of their religion. Yet the conversions continued. During the Roman persecutions, catacombs—underground cemeteries with secret passages—provided a hiding place for Christians. However, a key event would bring the persecutions to an end. 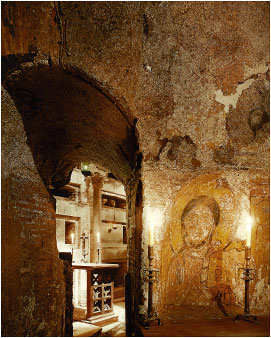 Catacomb - This picture of a catacomb in Rome shows burial niches and a painting of Jesus.
The Conversion of Constantine
ESSENTIAL QUESTION   What was Constantine's policy toward Christianity?
In A.D. 306, Constantine (KAHN•stuhn•TEEN) became the Roman emperor. Like those before him, he had allowed the persecution of Christians. In 312, however, he was waging a battle for leadership of Rome.
The Cross as Sign
In the midst of the fighting, Constantine prayed for help. Later he reported seeing a Christian cross in the sky along with these words: "In this sign you will conquer." He ordered his soldiers to put the symbol of the cross on their shields and battle flags. Constantine and his troops were victorious.
The Legalization of Christianity
The victorious Constantine immediately ended the persecution of Christians. Then, in the Edict of Milan, he made Christianity one of the empire's legal religions and returned property that had been seized during the persecutions. Constantine also built churches, used Christian symbols on coins, and made Sunday a holy day of rest and worship. But Rome's first Christian emperor delayed his own baptism, or formal conversion, until the end of his life.

Christianity Changes Rome
In 380, Emperor Theodosius decreed Christianity Rome's official religion. Eleven years later, Theodosius closed down all the pagan temples. "All the peoples we rule," he said, "shall practice that religion that Peter the Apostle transmitted to the Romans."
Beginnings of the Roman Catholic Church
ESSENTIAL QUESTION   What were some of the beliefs of the early church?
The practice of Christianity in Roman cities took on a common structure. Priests and deacons obeyed bishops, or local church leaders. Roman Catholic tradition says that Rome's first bishop was the apostle Peter. Much later, Rome's bishop gradually became the most important bishop, or pope. This was the beginning of the Roman Catholic Church. Catholic means "universal."
Beliefs and Practices
Some early Christian writers, called church fathers, developed a creed, or statement of beliefs. This creed featured a belief in the Trinity, or union of three divine persons—Father, Son (Jesus), and Holy Spirit—in one God. A church father from North Africa, Augustine, wrote about a God who was present everywhere. The church also developed sacraments—religious rites—such as baptism and communion, based on events in the life of Jesus.

To live the ideal Christian life and to celebrate these sacraments together, Christian men and women formed communities called monasteries. As the church grew, men entered the higher orders of the church, becoming bishops, priests, and deacons. Christianity changed from a small sect to a powerful, wealthy religion.
Lesson Summary
Why It Matters Now . . .
One-third of the people in the world today are Christian.