The ancient Olmec civilization is now considered to be one of the earliest great civilizations in Mesoamerica.  This civilization came and went long before the Aztec empire was even thought of, and yet they left their mark on the peoples of Mexico and beyond, and developed a complex culture which is still echoed today, probably in ways we don't yet even realize.

We know far less about the Olmecs than we do about, for example, the Aztecs and Mayans.  There are very few written records to tell us about the culture.  In fact, at first Olmec artifacts were thought to be Mayan, and the Mayans were thought to be the first great culture in the area.  The generally accepted belief is that the culture arose from people in the area, although some have suggested that the Olmecs may have originally come from Africa. 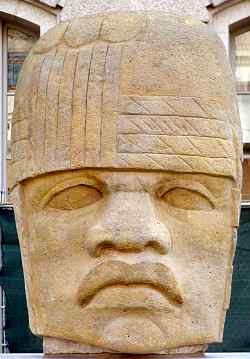 A great stone head from the Olmec civilization
Olmec Civilization
The major Olmec urban area in early times was San Lorenzo Tenochtitlán, at the time the largest city in Mesoamerica.  This was probably a ritual and political place, housing thousands and using an elaborate water and drainage system.  The city and in fact the ancient Olmec civilization is often remembered because of the gigantic stone heads that have been found here.

There are a couple of reasons why the Olmecs are so important.  First, they used and perhaps developed many things culturally and religiously that were later used by the Mayans and Aztecs and many other cultures.  Second, they had a wide influence in their day, which gives us reason to believe that they may be responsible for spreading some of these ideas.

The Olmecs carved stone, jade, and the volcanic rock basalt (used for the great stone heads).  The stone was quarried and imported.

We can see similar types of sculpture as far away as central Mexico (the land of the Aztecs) and the states of Oaxaca, Morelos, Guerrero, perhaps even farther.

In 2006, archaeologists unearthed a city that they believed was influenced by the Olmecs, only 40km / 25mi south of Mexico City.  A new urban society related to the Olmecs suggests that their influence may have been stronger than we ever suspected.

The Olmecs had a rich society, traded with far away peoples and ate a wide variety of foods (did they pioneer some dishes of Aztec food?). 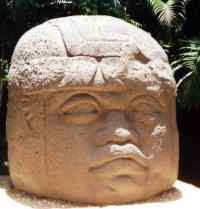 Another Olmec Head
Influence of the Olmecs
So aside from trade and carving, how did the Olmecs influence Mexico, and eventually the Aztec empire?  We're uncertain, but it's believed that they may have been early adopters of the complex religious system that the Mayans and the Aztecs would use.  Temple mounds, jaguars, many gods, and perhaps even human sacrifice were used by the Olmec society.  The jaguar is a common figure in Olmec religion - especially combined with a snake or human child.

The layout of their newer city (after the decline of San Lorenzo Tenochtitlán), La Venta, would be copied by future societies.

The calendar used for centuries in Mexico may also have originated with the Olmec.  Their astronomy was also carried on by later groups.  They were probably obsess with the timing of religious ritual, as the Mayans and Aztec would be after them.

Even the ritual ball game so popular among the Aztecs is believed to have been played in the ancient Olmec civilization.

What other Olmec influences were still felt in the Aztec empire?  Music?  The hierarchy of society?  Laws?  It may be that the influence of the ancient Olmec civilization is far greater than we now understand.
Ten Facts About the Ancient Olmec
The Olmec culture thrived along Mexico’s gulf coast from roughly 1200 to 400 B.C. Best known today for their carved colossal heads, the Olmecs were an important early Mesoamerican civilization which had much influence on later cultures such as the Aztecs and the Maya. What do we know about these mysterious ancient people?
1.  They were the First Major Mesoamerican Culture 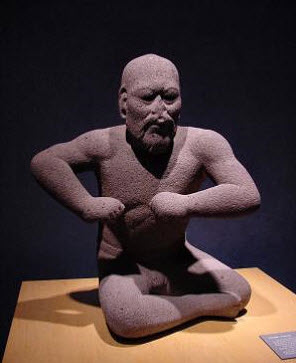 The Olmec Wrestler
The Olmecs were the first great culture to arise in Mexico and Central America. They established a city on a river island in 1200 B.C. or so: archaeologists, who do not know the original name of the city, call it San Lorenzo. San Lorenzo had no peers or rivals: it was the largest and most magnificent city in Mesoamerica at the time and it exerted great influence in the region. Archaeologists consider the Olmecs to be one of only six “pristine” civilizations: these were cultures that developed on their own without the benefit of migration or influence from some other civilization.
2.  Much of their Culture has been Lost

San Lorenzo Colossal Heads
The Olmecs thrived in the present-day Mexican states of Veracruz and Tabasco some three thousand years ago. Their civilization declined around 400 B.C. and their major cities were reclaimed by the jungle. Because so much time has passed, much information about their culture has been lost. For example, it is not known if the Olmec had books like the Maya and Aztecs. If there ever were any such books, they disintegrated long ago in the moist climate of Mexico's gulf coast. All that remains of Olmec culture are stonecarvings, ruined cities and a handful of wooden artifacts pulled from a bog at the El Manatí site. Nearly everything we know about the Olmec has been discovered and pieced together by archaeologists.
3.  They had a Rich Religion 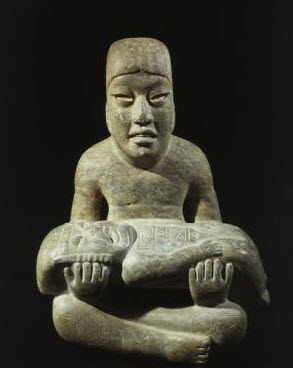 Las Limas Monument 1
The Olmec were religious and contact with the Gods was an important part of their daily life. Although no structure has been clearly identified as an Olmec temple, there are areas of archaeological sites which are considered to be religious complexes, such as complex A at La Venta and El Manatí. The Olmec may have practiced human sacrifice: some human bones located at suspected sacred sites seem to confirm this. They had a shaman class and an explanation for the cosmos around them.
4.  They had Gods 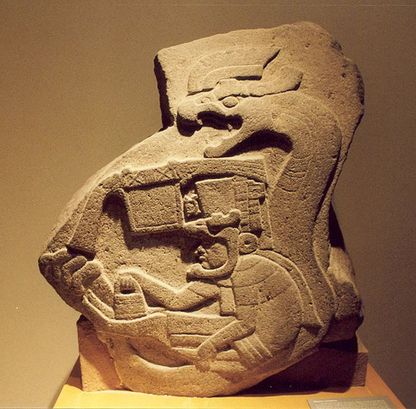 Archaeologist Peter Joralemon has identified eight gods – or at least supernatural beings of some sort – associated with the ancient Olmec culture. They are: the Olmec Dragon, the Bird Monster, the Fish Monster, the Banded-eye God, the Water God, the Maize God, the Were-jaguar and the Feathered Serpent. Some of these gods would remain in Mesoamerican mythology with other cultures: the Maya and the Aztecs both had feathered serpent gods.
5.  They were Extremely Talented Artists and Sculptors 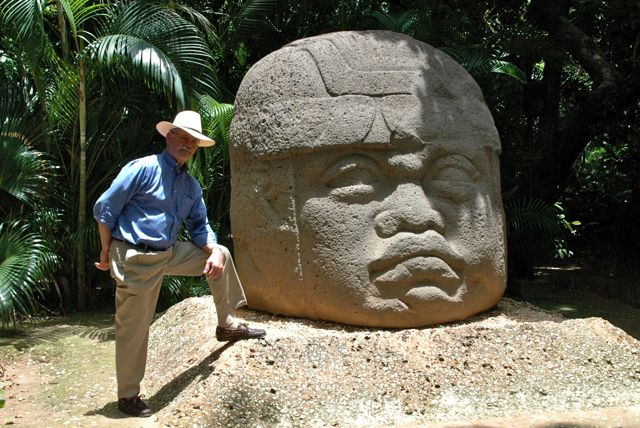 Olmec Colossal Head
Most of what we know about the Olmec comes from works they created in stone. The Olmecs were extremely talented artists and sculptors: they produced many statues, celts, masks, figurines, stelae, thrones and more. They are best known for their massive colossal heads, seventeen of which have been found at four different archaeological sites. They also worked with wood: most wooden Olmec sculptures have been lost, but a handful of them survived at the El Manatí site.
6.  They were Talented Architects and Engineers 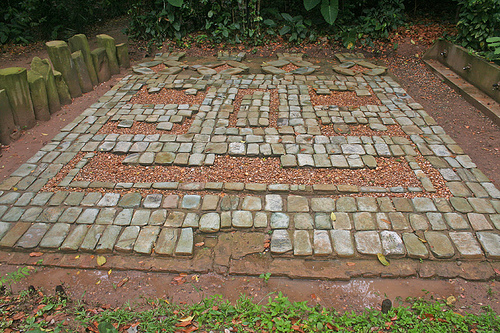 Olmec Mosaic at La Venta
The Olmecs built aqueducts, laboriously carving massive pieces of stone into identical blocks with a trough on one end: they then lined these blocks up side by side to create a channel for water to flow. That’s not their only feat of engineering, however. They created a man-made pyramid at La Venta: it is known as Complex C and is located in the Royal Compound at the heart of the city. Complex C is likely meant to represent a mountain and is made of earth: it must have taken countless man-hours to complete.
7.  The Olmec were Diligent Traders 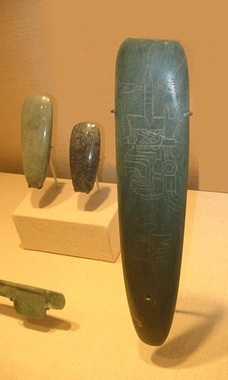 Olmec Celts
The Olmec apparently traded with other cultures all over Mesoamerica. Archaeologists know this for several reasons. First of all, objects from other regions, such as jadeite from present-day Guatemala and obsidian from the more mountainous regions of Mexico, have been discovered in Olmec sites. Additionally, Olmec objects, such as figurines, statues and celts, have been found in sites of other cultures contemporary to the Olmec. Other cultures seem to have learned much from the Olmec, as some less developed civilizations adopted Olmec pottery techniques.
8.  The Olmec were Organized Under Strong Political Power 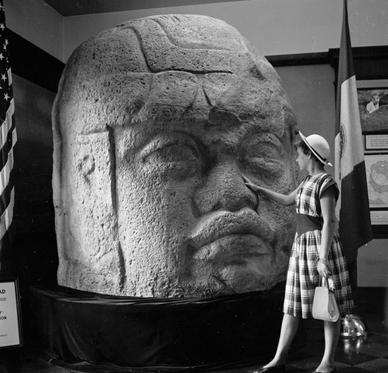 Olmec Colossal Head
The Olmec cities were ruled by a family of ruler-shamans who wielded enormous power over their subjects. This is seen in their public works: the colossal heads are a good example. Geological records show that the sources of the stone used in the San Lorenzo heads was found some 50 miles away. The Olmec had to get these massive boulders weighing many tons from the quarry to the workshops in the city. They moved these massive boulders many miles, most likely using a combination of sledges, rollers and rafts, before carving them without the benefit of metal tools. The end result? A massive stone head, possibly a portrait of the ruler who ordered the work. The fact that the OImec rulers could command such manpower speaks volumes about their political influence and control.
9.  They were Extremely Influential 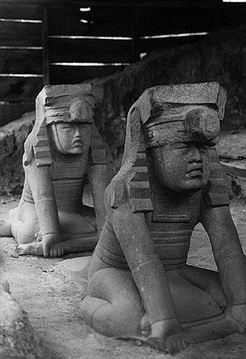 El Azuzul Twins
The Olmec are considered by historians to be the "mother" culture of Mesoamerica. All later cultures, such as the Veracruz, Maya, Toltec and Aztecs all borrowed from the Olmec. Certain Olmec gods, such as the Feathered Serpent, Maize God and Water God, would live on in the cosmos of these later civilizations. Although certain aspects of Olmec art, such as the colossal heads and massive thrones, were not adopted by later cultures, the influence of certain Olmec artistic styles on later Maya and Aztec works is obvious to even the untrained eye. The Olmec religion may have even survived: twin statues discovered at the El Azuzul site appear to be characters from the Popol Vuh, the sacred book the Maya used centuries later.
10.  No one knows what Happened to their Civilization 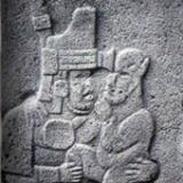 Olmec Stone Carving
This much is sure: after the decline of the major city at La Venta, around 400 B.C., the Olmec civilization was pretty much gone. No one really knows what happened to them. There are some clues, however. At San Lorenzo, sculptors started re-using pieces of stone that had already been carved, whereas the original stones had been brought in from many miles away. This suggests that perhaps it was no longer safe to go and get the blocks: perhaps local tribes had become hostile. Climate change may have also played a part: the Olmec subsisted on a small number of basic crops, and any change that affected the maize, beans and squash that comprised their staple diet would have been disastrous.