The Great Wall
What is it?

The Great Wall of China is a wall that covers much of the northern border of China. If you take the length of the entire wall, plus various branches, it is around 5,500 miles long! No wonder they call it the Great Wall. 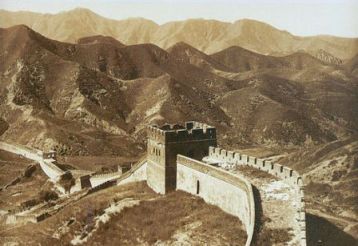 Great Wall of China
Why did they build the wall?

The wall was built to help keep out northern invaders like the Mongols. Smaller walls had been built over the years, but the first Emperor of China, Qin Shi Huang, decided that he wanted a single giant wall to protect his northern borders. He ordered that a single strong wall be built with thousands of lookout towers where soldiers could guard and protect his empire.

The wall was built by peasants, slaves, criminals, and other people that the emperor decided to punish. Soldiers were involved in building the wall and in managing the workers as well.

It is estimated that millions of people worked on the wall over the course of over 1000 years. Some scientists think that up to 1 million people died while building the wall. People building the wall were not treated very well. Many people were just buried under the wall when they died.

What did they build it with?

Was it just a wall?

The wall was really a fortification to protect the northern border. It was a wall, but also had watchtowers, beacon towers to send signals, and blockhouses to house soldiers. There were soldiers guarding the walls and towers. There were also towns built along the wall to garrison soldiers so they could quickly get to the wall in case of a large attack. It is estimated that over 1 million soldiers guarded the great wall during the height of the Ming Dynasty.

A wide road on top of the wall where soldiers could defend.
Fun Facts about the Great Wall of China
(Information from Ducksters.com)