The Legacy of India 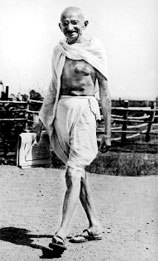 Mohandas Gandhi - In the early 20th century, Britain ruled India as a colony. Gandhi was one of the men who led the fight against foreign rule, but he practiced ahimsa while doing so. He took part only in nonviolent protests.
In ancient times, trade spread Indian religion and art to other parts of Asia. Indian culture continues to influence our modern world today.
India's Religious Legacy
ESSENTIAL QUESTION   How did the religions of India affect other cultures?
Yoga is as old as the Bhagavad Gita and as new as the yoga classes taught in health clubs. Its popularity shows that the ancient religious traditions of India are still very much alive.
Hinduism and Buddhism Today
Four out of five people living in India today are Hindus. Hindus also live in Nepal, Sri Lanka, Malaysia, and many other countries. Also, about 1 million people in the United States practice Hinduism.

Buddhism did not remain strong in India. Not even 1 percent of Indians today are Buddhists. But the religion is popular in Asia, Western Europe, and the United States. 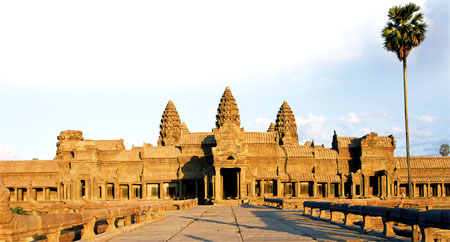 Today Hindu and Buddhist influences continue. For example, millions of people from other religions meditate and practice yoga.
India's Artistic Legacy
ESSENTIAL QUESTION   How have the Indian arts influenced other cultures?
The Legacy of Indian Mathematics
ESSENTIAL QUESTION   How does the mathematical knowledge of ancient India affect our lives today?
The numerals we use originated in India. People in India have been using the numerals for 1 to 9 for more than 2,000 years. Arab traders brought these numerals to the West. As a result, we call them Arabic numerals, or Hindu-Arabic numerals.

The number system first developed in India and used today is called the decimal system. The name comes from the Latin word decem, which means "ten." In a number such as 5,555, each numeral is worth ten times as much as the numeral to its right. The place of a numeral—the ones place, the tens place, the hundreds place, and so on—tells how much that numeral is worth.

The decimal system would not work without a symbol for zero. It would be impossible to write a number like 504 without some way to show that the tens place was empty. In India, the use of the zero goes back about 1,400 years.
Lesson Summary
Why It Matters Now . . .
Every day you use at least ten things that were invented in India. You can count on it!