Economics   Nomadic peoples often attack settlements to gain the goods that civilizations produce.
Roman armies spent a lot of time fighting people who wanted to enter the empire. Some nomads wanted the protection of the Roman Empire. Others wanted to take over Roman lands. They disrupted trade and took valuable goods. 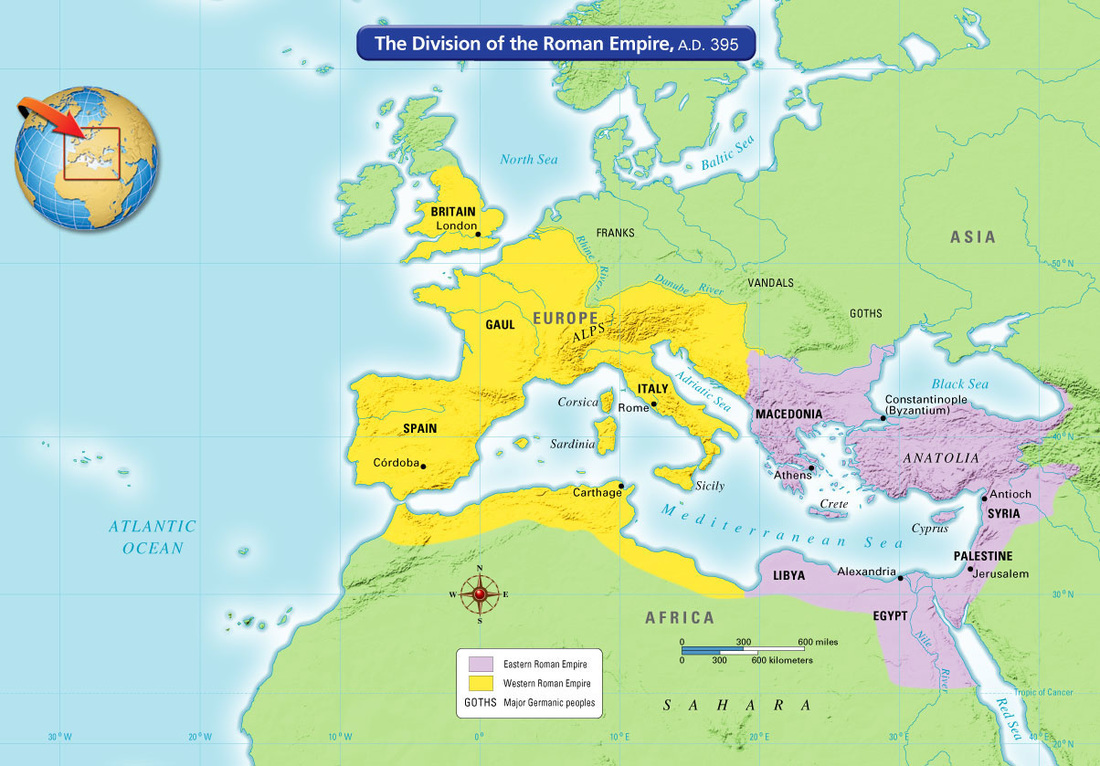 Click to enlarge
THE ARRIVAL OF THE GOTHS
Background:  The Goths were Germanic peoples who lived north and east of the Western Roman Empire. In A.D. 375, a fierce Asian people called the Huns began to invade the Goths' territory. The Huns killed hundreds of people and burned villages and fields. Fearing for their lives, some Goths fled to the Western Roman Empire. There, they asked the Romans for protection. Imagine that you are an observer as the Goths arrive at the border of the Roman Empire.

Sculpture of a Roman soldier triumphing over a barbarian 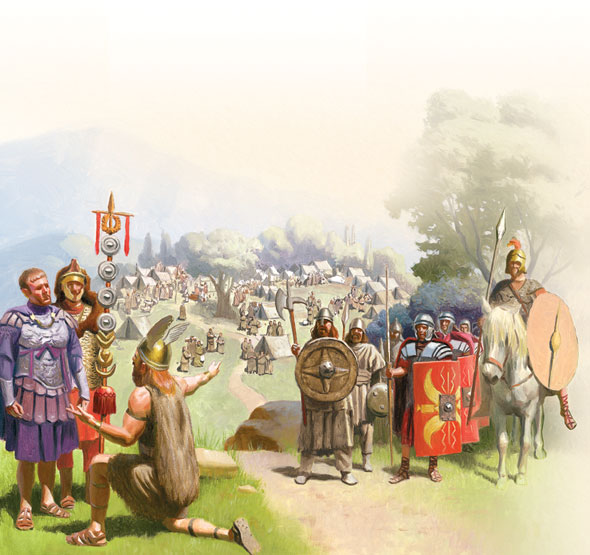 Fear of the Huns caused the western Goths to ask the Romans for protection. The Romans agreed to let the Goths cross the river into their empire. First, however, the Romans said the Goths must give up their weapons. But Goth warriors believed they had no honor without weapons. So they paid the Romans money or did favors for them in order to keep their weapons.

The river crossing was hard. The water was high and flowed swiftly. The floodwaters swept many people to their deaths.

Then the Goths entered a camp guarded by Roman soldiers. The governors of the region were supposed to feed the people. Instead, the Roman soldiers sold the people food—disgusting stuff that no Roman would eat. For example, some meat came from animals that died of disease. In exchange, the Romans took everything of value the Goths had.

Now the Romans are also buying Goth children and making them their slaves. Many Goth parents believe slavery is better than starvation. But they are bitter about making such a cruel choice.

Anger is growing. One Goth says, "We told the Romans that if they helped us, we would accept their religion and fight their enemies. As soon as we have nothing left to offer, they will starve us."

Some people propose going to the governors and explaining the Goths' suffering. "Maybe they will make the soldiers treat us better," one argues.

Others mutter about getting revenge. "We are men of honor. We still have weapons, and we can fight the Romans."

Emperor Trajan's Column The surface of this 130-foot column is carved with scenes of Trajan's wars against outsiders.
An Empire in Decline
Build on What You Know   Did you ever have a problem you thought you could solve, then realized you could not find the right solution for it? In this lesson you will learn that the Roman Empire began to develop difficult problems for which there seemed to be no obvious solutions.
Weakness in the Empire
ESSENTIAL QUESTION   What problems weakened Rome?
After the death of Emperor Marcus Aurelius in A.D. 180, a series of problems began to weaken the empire. These economic and political problems were difficult to solve.
Economic Problems
The empire could no longer feed its many people. Some farmland had been destroyed by warfare. But the biggest problem was improving farm production. With many slaves to do the work, plantation owners chose not to develop more-productive farming technology. As a result, the land wore out and harvests did not increase. Food shortages caused unrest.

The empire was running low on money. Taxes were high, so many people did not pay them. Without tax money, the government could not pay the army or buy needed services.

Hadrian's Wall - Hadrian's Wall marked the geographic border of the Roman Empire on the island of Britain. Like the Great Wall of China, this wall was supposed to help keep out invaders.
Military Problems
Rome was constantly at war with nomadic peoples in the north and northeast, as well as with the people who lived along its eastern borders. The empire needed larger armies to respond to so many threats, so it hired foreign mercenaries. A mercenary is a soldier for hire.

Mercenaries often had no loyalty to the empire. They pledged their allegiance to an individual military leader. Having armies that were loyal to only one man created independent military powers within the empire. In addition, mercenaries were not as disciplined as Roman soldiers. This lack of discipline made the army less effective. The result was a weakened defense along the empire's borders.
Political and Social Problems
The sheer physical size of the Roman Empire made it hard to govern. Government officials found it was not easy to obtain news about affairs in some regions of the empire. This made it more difficult to know where problems were developing. Also, many government officials were corrupt, seeking only to enrich themselves. These political problems destroyed a sense of citizenship. Many Romans no longer felt a sense of duty to the empire. Many chose to get rich in business rather than serve in the government. 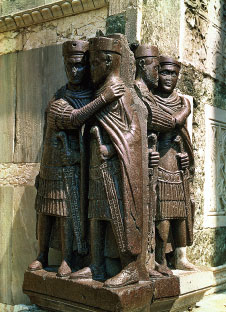 The Tetrarchs - This statue recognizes four emperors who ruled at the same time.
Diocletian Divides the Empire
ESSENTIAL QUESTION   What steps did Diocletian take to solve the empire's problems?
A rapidly changing series of emperors also weakened the government. During a 49-year period (from A.D. 235 to 284), Rome had 20 emperors. Some of them were military leaders who used their armies to seize control. With emperors changing so often, the Roman people had little sense of orderly rule.
Diocletian Restores Order
In A.D. 284, the emperor Diocletian (DY•uh•KLEE•shunn) took power. He changed the way the army operated by permanently placing troops at the empire's borders. He also introduced economic reforms, including keeping prices low on goods such as bread, to help feed the poor.

During his reign, Diocletian no longer bothered to consult with the Senate. He issued laws on his own. Diocletian was an absolute ruler, one who has total power.
Splitting the Empire
Diocletian soon realized that he could not effectively govern the huge empire. In A.D. 285, he reorganized it in two, taking the eastern portion for himself. He chose this area for its greater wealth and trade, and its magnificent cities. He appointed Maximian to rule the Western Empire. The two men ruled for 20 years. 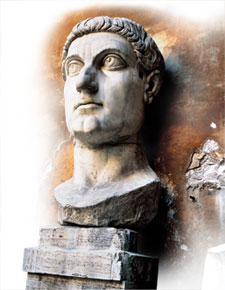 Bust of Constantine - Constantine was an important emperor who reunited the Roman Empire.
A New Capital
In a bold move, Constantine shifted the empire's capital from Rome to Byzantium. Byzantium was an ancient Greek city located in what is now Turkey. At a crossroads between east and west, the city was well placed for defense and trade. Constantine enlarged and beautified his new capital, which he renamed Constantinople. Today the city is called Istanbul.
Final Division
Constantine planned to have each of his three sons rule a portion of the empire after his death. His plan was unwise, for Constantius II, Constantine II, and Constans I created unrest by competing with one another. A period of conflict followed. In 395, the empire was permanently divided into east and west again.
Lesson Summary
Why It Matters Now . . .
The mistakes made by the Roman emperors remind us that to retain power and control, rulers must successfully deal with many different problems.
The Fall of the Roman Empire