Beliefs and Customs
Build on What You Know  Like other ancient peoples, the Greeks were polytheistic—they worshiped many gods. But you won't find gods with animal heads in Greece as you did in Egypt. Greek gods looked like humans, yet were more powerful and more beautiful than any human could be.
Greek Gods and Myths
ESSENTIAL QUESTION  What was Greek religion like?
To the Greeks, the gods were not distant beings. They became involved in people's lives, and the Greeks loved to tell stories about them. These vivid tales showed that the gods were sometimes cruel and selfish.
The Gods of Greece  The Greek gods had both divine and human qualities. For example, they were very powerful and could shape human events. Yet they had a wide range of human emotions, including love, anger, and jealousy. The gods and goddesses of Greece constantly competed with one another.
Zeus (ZOOS) was the ruler of the gods. The Greeks believed that he and 11 other major gods and goddesses lived on Mount Olympus (uh•LIHM•puhs), the highest mountain in Greece. The Greeks also worshiped many less-important gods.
Each city had a special god or goddess to protect it. For example, Athena (one of the 12 who lived on Olympus) was the protector of Athens. She was the goddess of wisdom, a warrior, and the patron of crafts such as weaving. 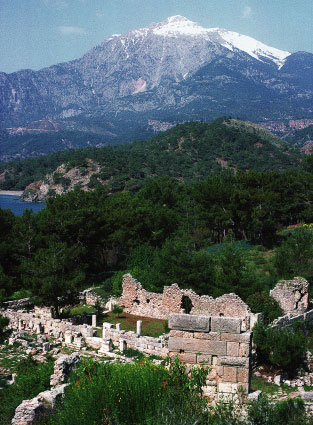 Zeus was the father of many other gods. Some of his children were Aphrodite, Apollo, Athena, and Hermes.

The Olympics   In Greece, games were always part of religious festivals. The largest and most elaborate of these were the Olympics . The Olympics were games held every four years as part of a major festival that honored Zeus. They took place in a stadium built in the city of Olympia. Only men competed in these contests.
The oldest records of winners at the Olympics date to 776 B.C. But the games might have been going on for centuries before that. The first Olympics included only a foot race. Over time, longer races and other events were added. Events included wrestling, the long jump, the javelin throw, and the discus throw. These games tested skills that were valuable to soldiers.
Unmarried girls competed in a festival to honor the goddess Hera. Hera was Zeus' wife, and her festival was held at the same time as the Olympics. This festival featured a foot race in three different age categories. 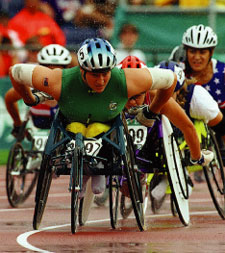 Olympics for All In modern times, a wider variety of athletes has the chance to compete in the Olympic games than ever before. 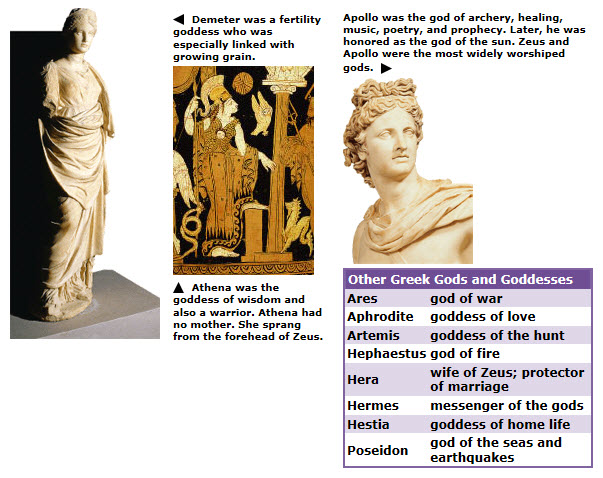 Homer's other major epic was the Odyssey. It describes the adventures of the Greek hero Odysseus (oh•DIHS•YOOS) after the Trojan War. The Greek gods decided that Odysseus' trip home should take ten years. During that time, he and his men encountered many dangers. The gods sometimes helped Odysseus and sometimes worked against him.
These ancient stories still influence speech and art today. For instance, we use the phrase Achilles' heel to refer to a person's weakest area. 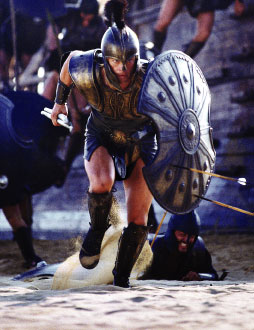 Achilles - The ancient Greek epics still influence our culture. For example, in 2004, the movie Troy retold the story of the Trojan War. Here the warrior Achilles does battle.
Aesop's Fables   A fable is a short story, usually involving animals, that teaches a moral lesson. A storyteller named Aesop (EE•suhp) is credited with writing down many ancient Greek fables.
One of Aesop's best-known fables is "The Hare and the Tortoise." In it, a hare (rabbit) makes fun of a tortoise (turtle) for being slow. The tortoise challenges the hare to a race. The hare is so sure he will win that he lies down for a nap. The tortoise never stops but goes at a slow, steady pace to the finish line. The hare wakes up too late for his speed to save him. We still use this story today to encourage people to work steadily at a task that seems impossible to accomplish. 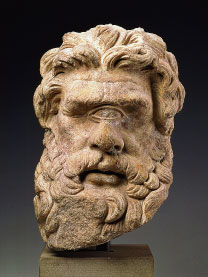 Cyclops - On Odysseus' long voyage, a one-eyed monster called a Cyclops made him and his men prisoners. The Cyclops ate several of the men before Odysseus defeated him.
Lesson Summary
• The ancient Greeks created stories about their gods, who were important to their daily lives.
• The ancient Greeks honored their gods through festivals that included rituals and athletic games.
• Early Greeks wrote fables and epic poems.
Why It Matters Now . . .
Greek mythology, epics, and fables continue to influence our literature, language, and movies.
The City-State and Democracy